In this article, we’ll briefly go over how neural networks can be used as a new type of audio effect called timbre transfer. Timbre transfer is an audio effect that changes the timbre of the input audio into some certain style. We’ll cover two recent architectures in this field: DDSP and RAVE.

Also, we will look at how you can train your own RAVE models and use them with our VST plugin, neutone.

At first glance, the autoencoder seems pointless, as it tries to reconstruct whatever input it is fed. However this can be used as a timbre transfer effect when you feed sounds that are different from what the training data. For example, an autoencoder that is trained on violin sounds can only reconstruct violin sounds. So, when it is fed flute sounds as input, it transfers the timbre into that of a violin.

DDSP (Differentiable Digital Signal Processing) refers to the incorporation of traditional DSP techniques in a deep learning framework. The basic DDSP model proposed by Engel et al. is an autoencoder-like model architecture with a DDSP-based synthesizer to produce the final output. Basically, it is specialized for musical sounds where the frequencies present in a sound is a multiple of the fundamental frequency. For example, when you play a note on some instrument at A4 (440Hz), there are overtones present at 880Hz, 1320Hz and so on. First, the encoder estimates the loudness and the fundamental frequency of the sound. Then, the decoder estimates the amplitude of each overtone and the DDSP synthesizer synthesizes the final output audio from those estimated parameters. You can read more about DDSP here.

The advantages of DDSP is that the assumptions it makes on the harmonicity of the sound allows it to efficiently train with high quality. Also, since the synthesizer is strictly conditioned on the fundamental frequency, it tends to follow the pitch of the input better than models like RAVE. On the other hand, these assumptions limits the type of sounds it can model. For example, DDSP cannot model percussions with no harmonic structure and polyphonic instruments like pianos that do not have a single fundamental frequency.

DDSP models will be available for neutone in late July.

RAVE (ReAltime Variational autoEncoder) is a VAE (Variational AutoEncoder) that encodes and decodes raw audio with convolutional neural networks (Caillon and Esling, 2022). RAVE employs many advanced techniques (such as PQMF sub-band coding) to make it fast enough to work in realtime in a CPU, whereas previous methods could not. It also utilizes a discriminator network similar to a GAN (Generative Adversarial Network) to improve the output quality.

As it processes raw audio without any assumptions, any type of sounds can be modeled by RAVE. The disadvantage compared to DDSP is that it is more computationally expensive to train (approximately 3 days on a RTX 3080), and requires more data to train (2~3 hours of training data or more).

As of 2022, there are two options for training RAVE models:

Preparing a good training data is the most difficult part of training RAVE models. While there are no sure-fire ways to prepare the perfect dataset, here are some tips:

Training on Colab should be straight forward. Configure the training settings using the text fields and check boxes, and execute the cells up to the “train RAVE” part. The prior training can be ignored for timbre transfer purposes.

The training script can be run by following the directions given by running cli_helper.py, or as:

There are some arguments for both python script/Colab that should be looked at:

Before wrapping the model for use in neutone, we have to export the model into torchscript format.

Make sure to set

for realtime-compatible convolution (see next section for details). 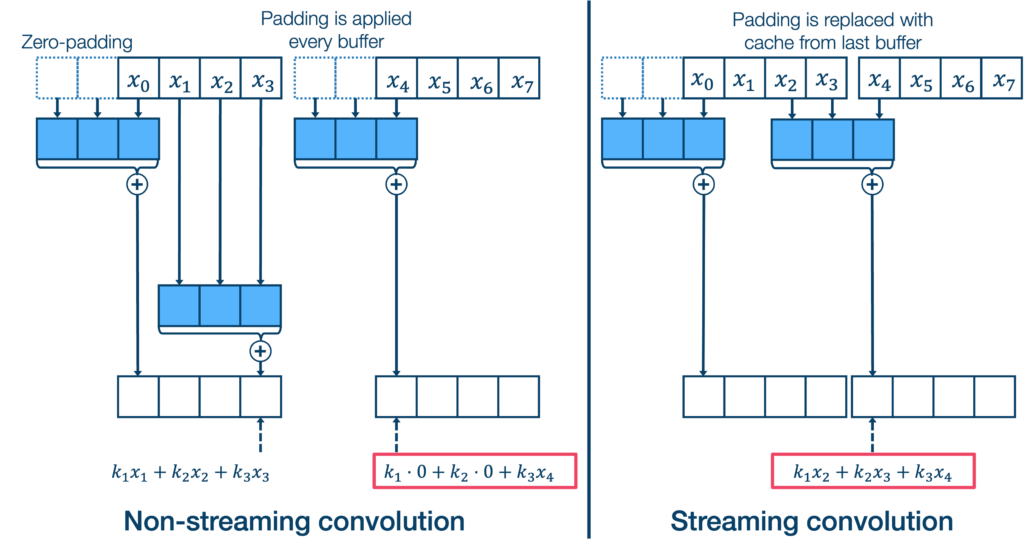 In a realtime audio effect, the model must process each buffer of audio one-by-one. But we want to process the audio in a way that is equivalent to processing the entire audio. For a model with convolutional layers, this becomes a problem. If we use standard convolution, unnecessary zero-padding will be added before (and after, in case of non-causal convolutions) every buffer, which messes up the continuity between buffers. Had we processed these buffers together with convolution, this zero-padding would not have been applied. Thus, a streaming convolution stores information from the previous buffer in a cache, which is used as the padding of the current buffer instead of zero-padding.

A simple implementation is shown in the example overdrive script of neutone_sdk. A more detailed explanation and a full implementation including Transposed Convolution will be added soon as well. In the meantime you can also check out the implementation used in RAVE and read this excellent article by Andrew Gibiansky, or this paper by the authors of RAVE.

Thanks for reading through this long article!
If you have any questions, feel free to ask us on our discord!